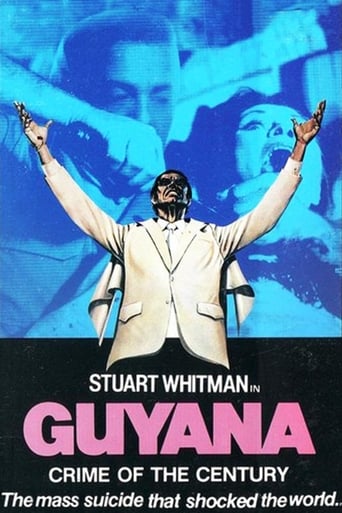 "The movie that dares to tell the truth behind the most shocking crime of the century!"

This horrific dramatization of the Guyana tragedy traces the steps of Reverend Jim Jones, a highly charismatic, but profoundly paranoid clergyman, who after years of evangelism and good deeds, begins his own church in the mid-western United States. When Jim Jones becomes increasingly obsessed with the belief that the CIA is "a wicked enemy" who is out to get him, he emigrates with his congregation to Guyana, where he plans to create a utopia. But Jim Jones' utopia consists of a society where he demands his followers turn their minds, bodies and possessions over to him, one that is rife with orgies, physical violence, mental torture, and sexual abuse of children and adults. Ultimately, Jim Jones' paranoia reaches a fevered pitch that culminates in him taking savage action against his own congregation. (VCI Home Video)

Guyana: Crime of the Century